ITS A NEW SPECIAL ED RECORD!!

198.40 is a new all-time high score in this league. What a week! Paul put together a FLAWLESS lineup with no points left on the bench. Personally we would have probably tried to find a way to get Singletary in the lineup, but we would have been wrong! Paul pulled ALL the right strings and put a devastating ass-whooping on Fox News’ Mike Tobin.

Clearly the “best” pickup of the week was New England D. But everybody knew that would happen. That was a pretty easy move, but we gotta give some kudos to Paul for getting that move done first thing Monday morning.

We were actually looking to pick up The Lifestyle Brand like 2 minutes after Paul did. We did get him picked up in the other league (AND started him!!), so that's some consolation.

Already known as one of the most elite athletes in this year's draft, McLaurin is now the clear #1 receiver for a team that’s going to have to throw the ball a lot, and could see garbage time action every single week.

Paul vs Tobin and Dave vs Andy are all wrapped up. Paul dominated, and Dave survived a James Conner injury to put Andy at 0-2.

Three other match-ups still depend on the Monday night outcome:

Rob has a 17 point lead which is very unlikely to fall, unless the Jets get blown out real early and Lev just sits out like 2 or 3 quarters. PREDICTION: ROB WINS!!

Matt needs 15 from Baker. That seems very doable, but let’s not forget our guy threw 3 picks and he STANKED last week. So Doug’s definitely still got a chance. PREDICTION: DOUG WINS!!

DYM is down by 16 to Saquons Heisman. We’re rolling out Odell and the Browns D against the WORST pickup of the week Jarvis “garbage” Landry. Cleveland D might get the 16 by themselves (against Trevor Simeon), then if Odell can’t outscore that piece of shit Jarvis… I mean… Look, this was BAD pickup for Chris for the same reason Smokey was a good one last week. The Jets are especially bad against WRs who are fast, and Jarvis is not that. COME ON, OH-DALE!!!!!

This year we embark on our most fraught journey yet. THE BAGEL TOUR. 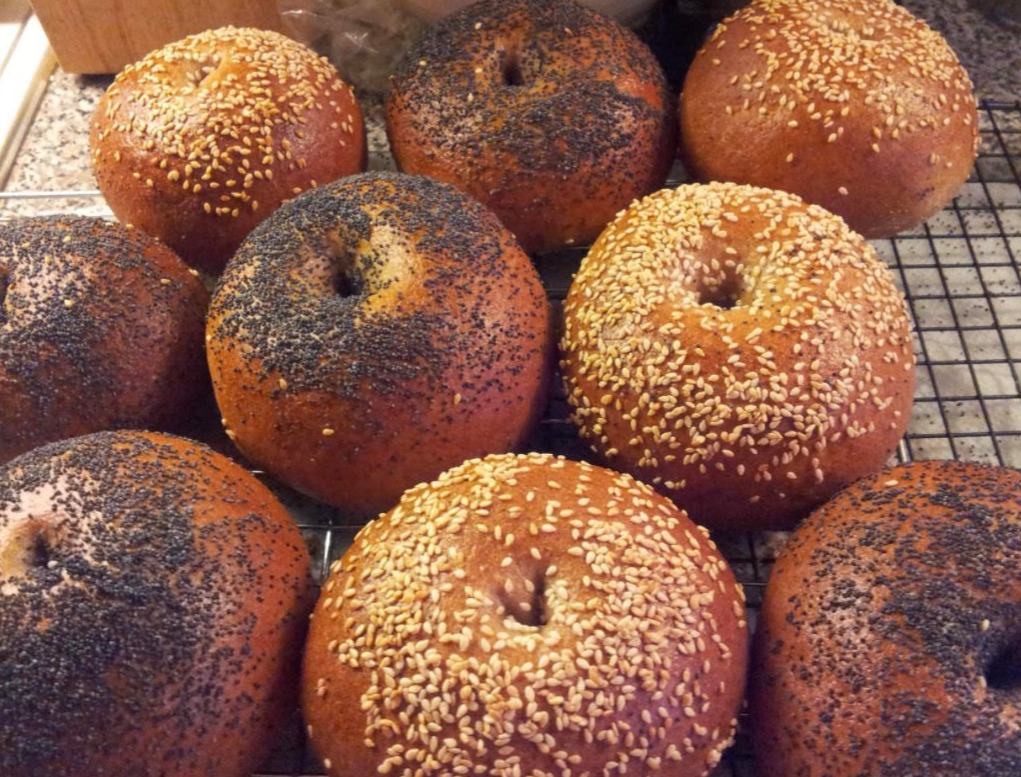 Bagels are probably the most important staple in our diet. As far back as we can remember we’ve been eating a bagel for breakfast pretty much everyday. These days we usually we go with a whole wheat everything bagel with peanut butter (stay jacked, young g’s), once a week or so we’ll splurge on a bacon and egg bagel sandwich.

Obviously we know our way around a bagel shop, and we’re pretty picky about the quality of bagel we bring into our home. Unfortunately, we’ve yet to find a decent bagel in the goy-heavy Chatham/Madison-metro area. So for the past two years we’ve made the 15min commute to New Providence for Good Bagels every week. Hopefully that comes to an end this year.

Just like last year, we’ve carefully selected the top EIGHT bagel spots within 3.5 miles of the DYM headquarters. We'll visit one each week in order of proximity to the home office. After week 9 we will narrow the field down to the top 4 for the head-to-head Bagel Playoff showdowns, wrapping up before the Special Ed Playoffs.

On Sunday morning we tried Madison’s Hottest new breakfast spot, Madison Bagel. We went there with the boy and our special guest judge Dave Maulbeck, the official non-league-best-friend of DYM.

The place is nice inside which is actually a little unsettling. It looks like a Panera, which is to say it seems very sanitary and corporate. That atmosphere belies the home-town feel one might get from the shop's name.

The good things about this place are product selection. You can get non-dairy schmeres like peanut butter, jelly, and hummus. The coffee is good, and they have nitro taps. And they make doughnuts in-house.

The bagels themselves, though, were not good.

They kept the Panera theme going with a very uniform (possibly machine-rolled) bagel that was both too small and too light. The meat of the bagel was slightly flaky, not spongy and sticky like it ought to be. This problem generally indicates a low-quality flour without the proper protein content.

On a somewhat positive note: The crust was good, not great, and we did like the generous salt on the everything topping.

Most disappointing of all was the decidedly NOT fresh veggies on Cynthia's lox sandwich. They were pretty gross. They’ll be assessed negative bonus points for that.

(All facts and quotes courtesy of wikipedia.org and defendyourmoves.com)

Last week “President” Trump proposed a nationwide ban on flavored vapes. Obviously this is an issue that’s near and dear to the Irving household. As soon as we moved back to Jersey this summer we opened a vape shop near our new place in Montclair.

But more importantly- As a professional athlete I can't afford to take any risks with my health, so I vape everything: nicotine, thc, cbd, oil, wax, iced tea, whatever. I just vaped a bagel with lox this morning for breakfast. IT WAS DELICIOUS (Score: 8/10).

See, Trump KNOWS flavored vapes are an indispensable part of the life of our community. That’s why he wants to kill it - he’s trying to weaken us by eroding our cultural heritage. They know exactly what they’re doing.

Of course Native Americans have been flavoring tobacco for thousands of years. But, did you know that the first Englishman ever known to smoke publicly was a man in Bristol in the year 1556?

Who was the King of England in the 13th century?

Hmmmm, what did Henry III do again? Oh yea. “He extracted huge sums of money from the Jews in England, ultimately crippling their ability to do business, and as attitudes towards the Jews hardened, he introduced the Statute of Jewry, attempting to segregate the community”

And how many Articles were there in Henry III’s “Statute of Jewry”??

In 1253, Henry III issued the Statute of Jewry “In response to antisemitic feelings” and “attempted to segregate the Jews” in England.

Brown v Board of Ed was in 1954, and Jim Crow laws were enforced in some states until 1965. And what was young Donald Trump doing in the early sixties?

Well, he enrolled at Fordham University in 1964, THE LAST YEAR OF JIM CROW. Before that, Trump played tight end on his High School football team.

Yes, you read that right!! TRUMP spent the last several years of the Jim Crow era playing TIGHT END. Catchin ALL that brain damage. Which every DYM Reader already knows is directly tied to radical-conservative-ism.

Of course radical conservative movements recur in cycles throughout history.

King Henry III was a direct ideological decedent of the Puritans who would massacre the Native people of this continent, and the German Nazis, and all post-war white supremacists.

The CTE-riddled Trump "administration" believe that 2019 is the Time of Prophecy.

Just like Vigo the Carpathian, Trump has built an unholy edifice in the middle of Manhattan for the express purpose of reviving all the most monstrous evils in the history of Western Civilization.

CLEARLY, the flavored vape ban IS a direct and calculated attempt to disenfranchise Jews. Especially the Black African Jews who are the original man, and rightful heirs, of this planet.

All you gotta do is connect-the-dots, folks. It’s all right there, right in front of our faces!!

HAVE A GREAT MONDAY NIGHT EVERYBODY!!